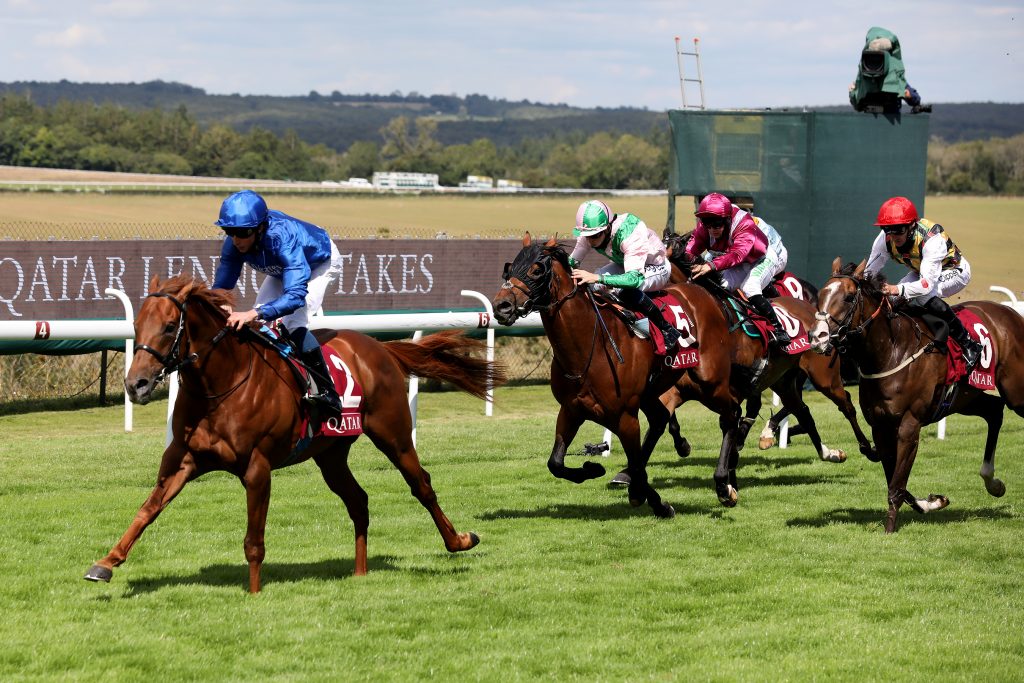 Space Blues (Charlie Appleby/William Buick, 2/1 Fav) was the comfortable winner of the seven-furlong G2 Qatar Lennox Stakes for Godolphin. The four-year-old Dubawi colt was winning at G2 level for the first time in his career, having twice been placed at G1 level.

Held up towards the rear, Space Blues was travelling well and made smooth headway to challenge two furlongs out. Entering the final furlong, he shot clear and never looked in any danger as he came home two lengths to the good of Duke Of Hazzard (Paul & Oliver Cole/David Probert, 5/1).

Charlie Appleby said: “I was delighted with Space Blues. He got a nice clean run round there. There was plenty of pace on and William was keen to keep it simple with him and he did.

“When he came into the straight, I was always confident he was going to pick up. It was a good performance.

“On the back of that, it would be nice to see how fresh we can get him as possible – I feel the G1 Prix Maurice De Gheest (Sunday, August 9) is something to target. He ran well in the race last year [finished 3rd].

“He is a stronger horse this year, he is a great traveller and has that gear change. It would be nice to give him a crack at a Group One again, but obviously it does come in 12 days’ time.

“Coming back to six in Dubai was a challenge I gave him off the back of a break and there is no doubt about it that since coming back to Europe, he has been a better horse. He is a seven-furlong specialist, it has been proven on paper and I am not going to try and swerve away from that. Obviously, you have the Foret as a potential race as well.

“He is a horse who is in great form and any athlete, when they are winning, they enjoy it and that is what he is doing at this present time.

“All is going well. The horses are well, William is riding out of his skin and well done to the team back home who are all doing a great job.”

William Buick added: “Space Blues still has still to make the grade at G1 level but ran very well to finish third in the Prix Maurice de Gheest last year. He is a horse who is improving and a very professional horse – he is really easy to deal with.

“It is beautiful ground out there, they are just making a print, which really suits him. I thought it was a really good performance. You would have to say seven furlongs is his optimum because six furlongs out in Meydan did not really suit him, but I don’t think that was the horse’s fault.”