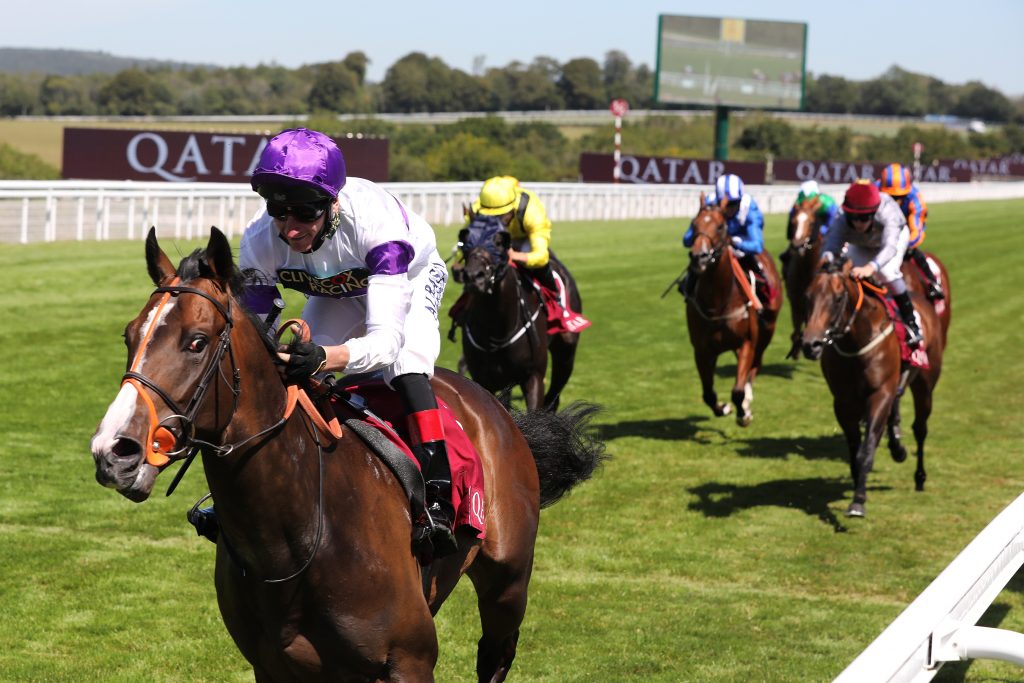 Trainer Clive Cox and jockey Adam Kirby landed the G2 Qatar Richmond Stakes a year ago with subsequent G1 Commonwealth Cup hero Golden Horde and the duo were on the mark again with 11/2 chance Supremacy in the six-furlong contest for two-year-olds.

A son of Mehmas, winner of this race in 2016, Supremacy broke well from stall two and soon went into the lead. He continued at the head of affairs and saw off all comers before going away again in the final furlong to score by four lengths from 13/8 favourite Yazaman (William Haggas/Tom Marquand).

Clive Cox said: “We knew Supremacy was nice. He was very green last time but he has been a horse with a lovely temperament to deal with.

“Adam rode him last time at Windsor when he won in a very fast time and this was soon enough.

“In a perfect world, I would have liked another week or two to be honest with you. But he has done that so well and I am so pleased for him – he has taken a big step forward.

“Supremacy has bags of speed and the way he finished that race after going so quick was amazing.

“I think Golden Horde was a bigger horse at this stage of his life. What he did last year was amazing and clearly he has progressed as a three-year-old winning the Commonwealth Cup.

“Supremacy is only just getting going really. This was a big enough step because it has been a strange year, but having confidence in a great bunch of horses at home with some great staff – I am just pleased the horse has been able to follow up like we thought he might be able to.

“He is obviously very high-class, so we’ll just think about where we go next. It is important to see how he comes out of it, as always – he is not just about this year as well.”

Adam Kirby said: “Supremacy is quite tall and scopey and has quite a long stride; he finds things easy there on the front end, and when I asked him to lengthen, he can just do that. He quickened and then lengthened and ran all the way through the line, so I like that. It was a very smart performance.

“He is all speed. He has come forward again from his last run and I was really pleased with him. He is very, very quick. It almost feels as though you have it easy on him – he has an exceptional cruising speed. He most certainly wasn’t stopping at the line and I really like him. I am quite excited about him, actually.

“Both he and Golden Horde have the same cruising speed and temperament. Fair play to Clive Cox, he is a top man who keeps turning these horses up and it is full credit to him, not me.

“Coming into the race, I really liked him because his maiden run was obviously very good. I didn’t go out there with all guns blazing and the intention of grabbing the rail, it has just kind of happened at that way, and as most people would know, on a baby if you have got the rail, it can just help.

“Supremacy and Nando Parrado [on whom Kirby won the Coventry Stakes at Royal Ascot] are two very nice horses. Supremacy likes a bit quicker ground – I’m not saying he can’t go on good, I am sure he can – and Nando Parrado, for me, just needs that small cut in the ground to be at his best. No complaints from me – they are two very smart colts.

“I am sure the chance of a run in a G1 will present itself quickly, but we’ll take it each step at a time. Supremacy’s not just a horse for this year; he has got plenty of scope and size and there is no reason why he won’t train on. He is fast.”