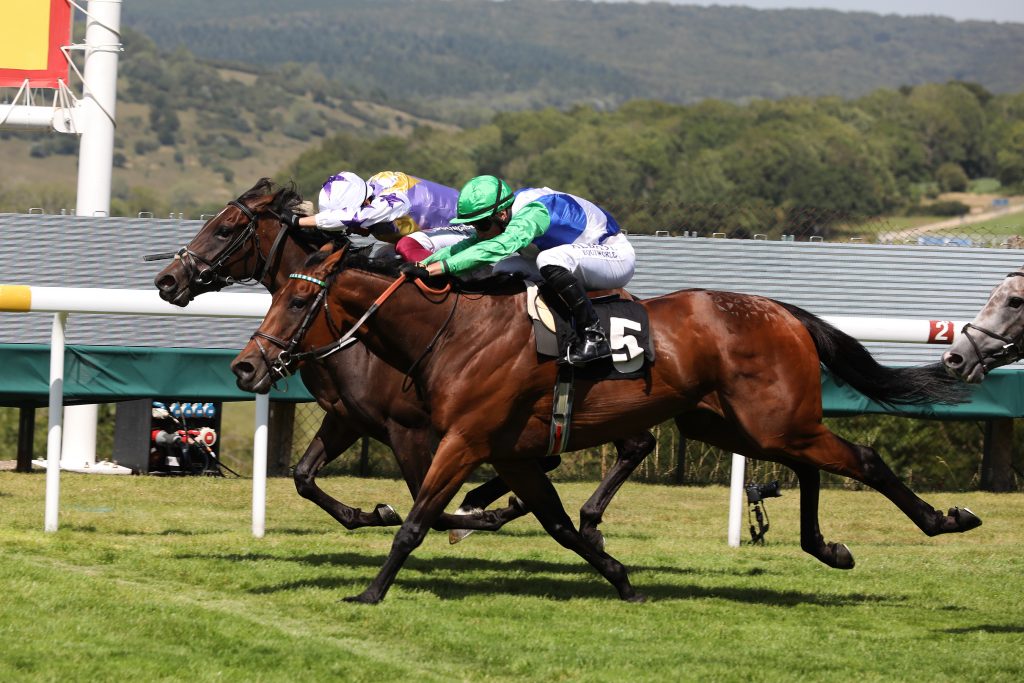 One Master (William Haggas/Tom Marquand) justified her position as 6/4 market leader for the G3 Saint Clair Oak Tree Stakes, getting up on the line to take the honours.

Entering the final two furlongs, it was not clear if a gap would appear for the six-year-old Fastnet Rock mare as she raced close to the rail. It was not until well inside the final furlong that she was in the clear to deliver a challenge but when she did, she quickened tremendously to get up on the line and score by a short head from Valeria Messalina (Jessica Harrington IRE/Frankie Dettori, 12/1).

William Haggas said: “That is our 30th winner in July. I get all the glory and my team do all the work.

“I had a walk round this morning and I thought it was too firm for One Master.

“However, there is a beautiful strip of ground down to the three-furlong pole from the start and there is still a little bit of give in there and I felt drawn in stall one, she would be able to go round there on the bridle into the straight.

“I was fearful and I won’t be relaxed until I see her tomorrow, but she is a really genuine filly.

“I said to the owners last night that we’re drawn in stall one, we are going to run on the rail and ride her for luck.

“It is a terrible place Goodwood in terms of getting boxed in, but she will be on the bridle and it won’t hurt her.

“Tom managed to get out and it was great – she has a terrific turn of foot in this company. If anything had been right today, she had an outstanding chance and it proved that way.

Tom Marquand said: “As a youngster, I always watched Hughsie [Richard Hughes] playing it late and I wasn’t quite sure whether I would get there on the line, but what an exceptional performance. To be able to pick up from that – I was quoted earlier in the week saying three back from the fence was where you are at your most vulnerable, and where did I end up? One Master is a class apart. She has won Group Ones, but for her to show that turn of foot today on ground she doesn’t really enjoy is pretty exceptional.

“She has always been a filly who has needed that cover early on, and it was always the plan just to sit in a little bit, but William left it very much up to me as to how far back or forward I needed to be. The only thing he did say when he wandered round the track was that the fresh ground was all down the inside, and try not to leave the paint. I played that to the furlong pole, and then thought something’s got to give at some point! Lucky that I was on such a talented filly, and how tough she was when not really enjoying the ground to pick up in a matter of two strides and pick off the leader – it’s a real thrill to ride a horse like that.

“It has been well-reported over the past few weeks, I suppose, about our interference rules over here, and from riding abroad it certainly makes you cautious of what you are doing, because you are used to riding under rules that are probably a touch more strict. It is always something that’s in the back of my mind. I think Jason was quoted yesterday saying all is fair when out on the track and I think if people are riding you in on a 6/4 favourite, everyone would be doing the same. I think it is probably just a testament to how good One Master is that she managed to get herself out of trouble and pick up that well.

“I would love to sit on her in a Group One on the ground she actually loves. She has been seen to use it before against the top-class horses as well, so I can imagine she’s a really nice filly to have by your side when you are in trouble.”