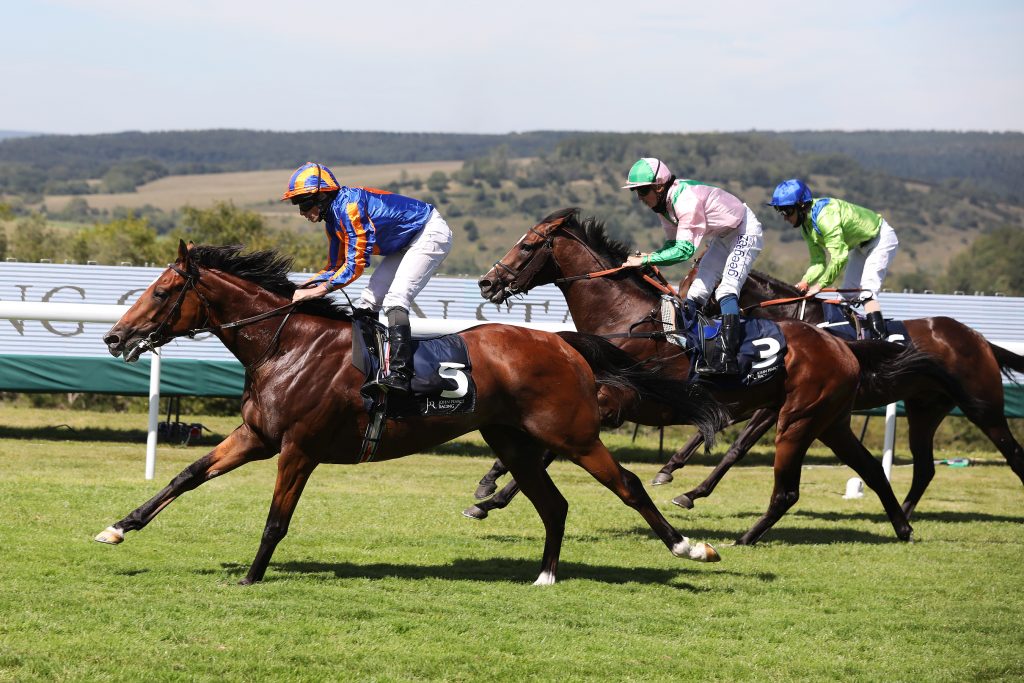 Mogul (Aidan O’Brien/Ryan Moore, 9/2), a G2-winning juvenile, recorded his first victory as a three-year-old in the G3 John Pearce Racing Gordon Stakes over a mile and a half. The Galileo colt had previously finished a staying-on sixth in the G1 Investec Derby at Epsom Downs on 4 July.

Subjectivist (Mark Johnston/Joe Fanning, 17/2) had established a clear lead before being challenged entering the final two furlongs. At that point, Mogul was being asked to quicken by jockey Ryan Moore.

Subjectivist held on until the final half-furlong, when he was passed by Mogul and also Highland Chief (Paul & Oliver Cole/David Probert, 22/1). At the finish, Mogul was on top by

Aidan O’Brien said: : “We always thought that Mogul was going to take two runs, and we were hoping to get that into him before the Derby, but obviously the Derby was only his second run and this was his third today. We were delighted with him today.

“We still think there is more to come from him – we were thinking of going to the Grand Prix de Paris with him next, maybe. That was the plan if everything went well today. We just said that was a race that would suit him – if they are all well [Serpentine as well] they will all run.

“When you look at him he’s built like a miler, so he’s a big, strong, powerful horse, carries a lot of muscle and weight, so he was always going to take racing to get him tuned up, really.

“Santiago is our St Leger horse, I think, and obviously there are other horses there. We have horses going to York and that and we will see when we get a little bit closer. We weren’t really sure about this horse at a mile and a half, but he toughed it out and it looks like he got it today.

“Japan came back from the King George a little bit sore, and he had a bad stone bruise the following day, so maybe he was feeling that on the fast ground. Often those kind of things are there and you don’t know – they take a bit of time to come out – but he was very sore the next day and maybe that’s the reason for his disappointing run.”

Ryan Moore said: “I am very happy with what Mogul did. He is still a bit babyish. He is a horse that I have thought a lot of, and Aidan has always said that his third run was going to be his best run. He was tough today – these horses had good form – and I like to think that he would find a bit more improvement.

“I wouldn’t be sure about that [Mogul being a St Leger horse] but we are very happy with what he has done today. He has progressed with each run, so hopefully he can carry on that way.”

Paul Smith, son of Derrick Smith who owns Mogul in partnership with Michael Tabor and Sue Magnier, said: “We always thought Mogul would improve from the Derby.

“Aidan has been on record saying that he was one run short for the Derby so knew we had come out of it and come on from it.

“I think he might improve again. There is more to come and he is learning all the time. Ryan got him into a lovely rhythm, and he fought hard at the end there.

“It was very encouraging, and he is something to look forward to.

“He is a top-quality mile and a half horse. You could drop him back, but we are thinking of races like the Grand Prix de Paris [in September].

“Mogul gets that trip well. He is built like a sprinter, so he has speed in him too. He is very versatile.

“Mogul is a big, strong horse and it is sometimes difficult to get the weight off him as he is so big. He is very clear-winded and is a lovely horse. He sometimes just takes a while to come to hand.

“The Grand Prix de Paris is still the plan with Serpentine [Epsom Derby hero] so we’ll see how they all are in the next week and start to make a plan.

“I think Serpentine was a good winner of the Derby, I really do, and he wasn’t stopping at the end. He ran for fun out there and I think you are going to see a good horse the next time he runs.”

Oliver Cole, who trains runner-up Highland Chief in partnership with his father Paul, said: “We are very, very pleased with the horse. I would have to see the race again, but David Probert thought Mogul came up and he went again. Ryan has obviously ridden a peach and I supposed we are very happy to know that we have a very good horse.

“The advantage we had today was that there weren’t many runners so there wasn’t much hustle and bustle. He could relax and enjoy it without being cramped, which played to his advantage. Maybe the Voltigeur next, although it might come a little bit quick. It’s a real pity that we didn’t get the run of the race in the Derby – I’m not saying we would have won the Derby but it would have been  a lot more exciting than being out the back the whole time.”

Frankie Dettori said of fourth-placed English King, the 5/4 favourite: “He came off the bridle too early and he was staying on at the end. We are toying with the idea of the St Leger.”