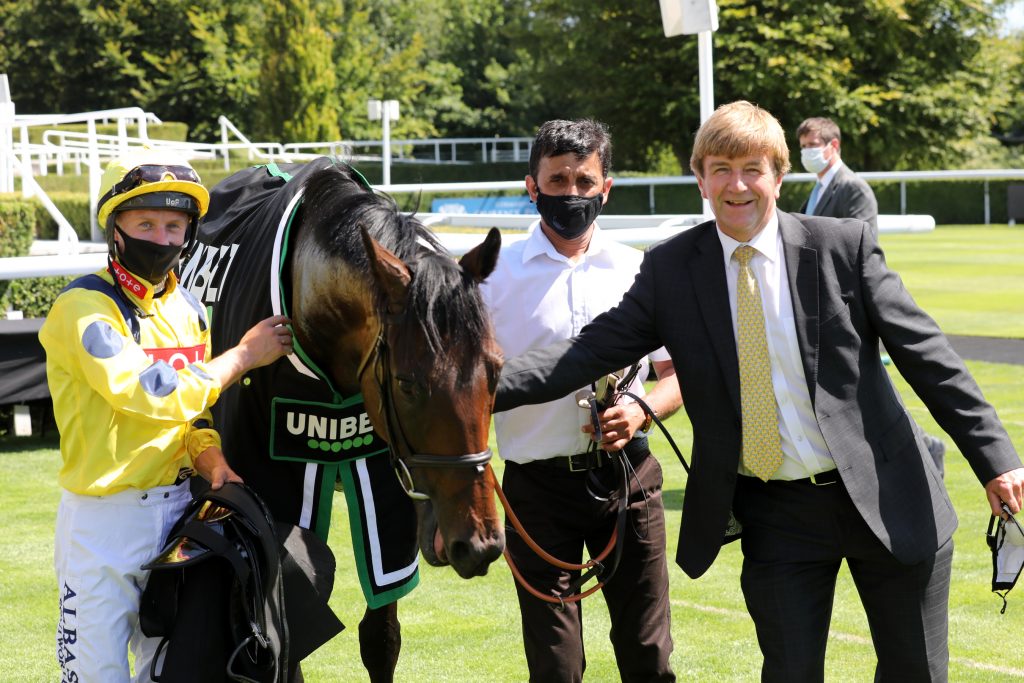 Run over a distance of two miles, four furlongs and 134 yards, the Unibet You’re On Goodwood Handicap is the longest race of the Qatar Goodwood Festival.

It was 25/1 chance Just Hubert (William Muir/Tom Marquand) who came out on top. The four-year-old still had plenty to do as the 15-strong field entered the home straight but began to make progress entering the final quarter mile. He mounted a challenge approaching the final furlong and overhauled long-time leader Rochester House (Mark Johnston/Silvestre De Sousa, 6/1) in the last half-furlong to win by a neck.

William Muir said: “Just Hubert takes a bit of getting ready. If you look at his first three runs last year, I was telling the owner that this was a good horse and he ran rubbish at Bath. Then he ran better at Chester on his favoured ground – it was really soft – but he couldn’t get a run and got stopped everywhere. Then we went to Newbury, when Kerrin McEvoy rode him and he said that we would have a really decent horse if we gelded him. I didn’t and then he won before winning a 50-grand race at Musselburgh. This year has been the same.

“He is not like most horses, he likes his own routine. For stayers, his routine doesn’t do as much as what you would do – if I had a swimming pool and could swim him every night, it would make life easier. I think it takes a little bit of racing to get him 100 per cent right.

“If you see the way he races, he is always on and off the bridle. He never overdoes himself and I think he will get three miles if you asked him to. We have won a neck, so can the handicapper hurt us too much? He dropped us 1lb from Newbury, which we didn’t take advantage of as he ran off 88 today. We will look for another two-mile handicap. I don’t think it matters about the company and, when his mind is right, he could run and compete in whatever staying race there is.”

Tom Marquand added: “Just Hubert was great. I guess he has been a bit quirky in a few of his runs; getting him out of the gates has been an issue sometimes, so at least that element wasn’t ever going to be an issue today [because of the flag start], but I think whenever there’s a Johnston horse in front you are wary of when you try to get to them – if you go too soon and they get a chance to battle back, they tend to do so, but luckily the way the race panned out I was able just to have one crack inside the last 15 strides, and my lad was pretty tough to get by.

“That was his first time at that real extreme trip – he has had a few goes at two miles, but he can clearly stay all day. I think races like this tend to be run to suit him – he can go a nice gallop and sit in a pocket and get dragged on round, and with the right splits he can clearly finish the job off as well.

“I think he does let himself down on ground like this. I don’t know whether it’s quite stereotypical that a lot of horses running in these two and a half mile races tend to be dual-purpose or at least going to angle on towards going to be jumpers, and I guess they get a bit more used to more cut in the ground and they are bred to be that way as well, whereas having a horse that can bounce off the top of quick ground like he can is a big old help, because you are running against the majority that can’t.

“It has been an incredible year for William [Muir]. He has not got a huge team but he always does really well with what he’s got, and this year he’s walking away with a Royal Ascot winner and a Glorious Goodwood winner, and we are not even halfway through the season yet. Long may that run continue for him because it is certainly well-deserved.”

Non-Runner: Mukha Magic (withdrawn at start – price at time of withdrawal 66/1. Rule 4 does not apply)