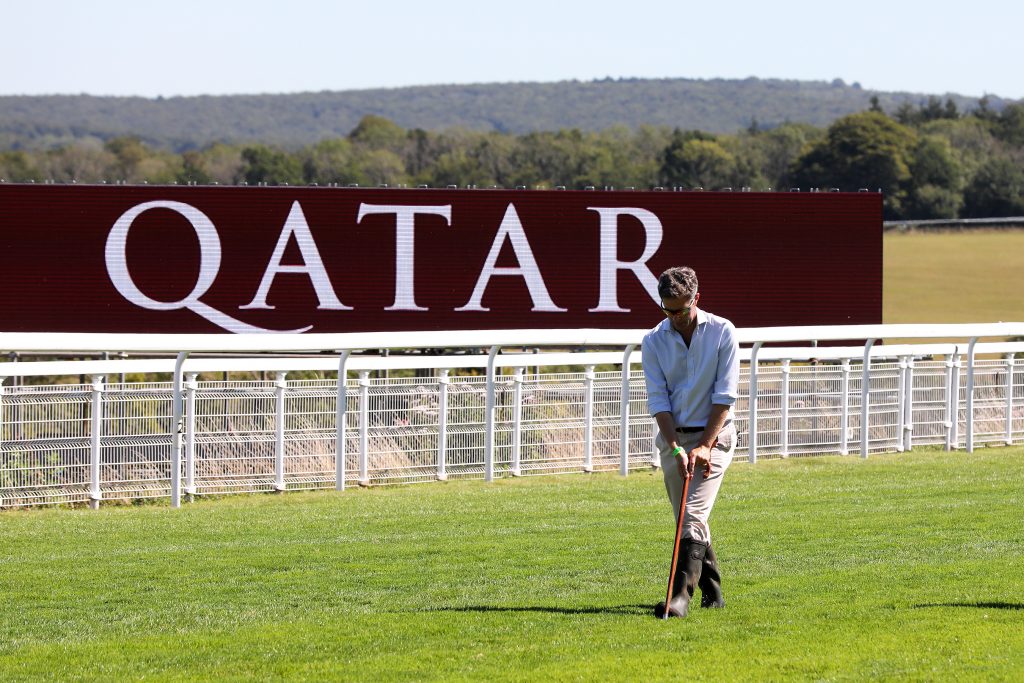 Speaking at the end of day three of the Qatar Goodwood Festival, Clerk of the Course Ed Arkell said: “Today was another very warm day. We left the going as Good, Good to Firm in places, and the times would suggest it is that or maybe Good to Firm, Good in places by the end of racing.

“We will have a walk in the morning and see where we are – we are just taking a GoingStick reading at the moment, so that will give us an idea of what has happened during the day, and we will get the evapotranspiration rates and the moisture content. We will put some water on the Round Course tonight; quite how much, we will wait and see what the figures tell us. The weather forecast suggests that it will probably be hotter again tomorrow.

“The G1 Qatar Nassau Stakes is my favourite race of the week and I thought it was great – really good strength in depth. It was fantastic for Donnacha O’Brien – Fancy Blue is some filly to do that, and it was amazing that it was his first runner and first winner in Britain, and it is a Group One winner.

“Clive Cox has another very smart two-year-old in the Qatar Richmond Stakes winner Supremacy, I would suggest, and it was interesting to see how the John Pearce Racing Gordon Stakes panned out and what that means for the Derby form.”

Permission was given for HAND ON MY HEART to wear a red hood to the start. Following the race, Ryan Moore reported that CASPIAN QUEEN (IRE), which started favourite and finished unplaced, was denied a clear run inside the final furlong.

Permission was given for AL SALT (IRE) and MAGICAL MORNING to wear red hoods to the start. The Starter reported that LUCANDER (IRE) refused to enter the stalls and was withdrawn at 1:46pm. Ralph Beckett was informed that the gelding could not run until the day after passing a stalls test. The performance of MAGICAL MORNING, which finished unplaced, beaten by 16½ lengths, was considered. The representative of John Gosden’s explanation that the colt appeared to have not been suited by the step up in trip to 1 mile 2 furlongs on this occasion was noted. Following the race, Andrea Atzeni reported that MAGNETISED, which started favourite and finished unplaced, stopped quickly and Roger Varian reported that the colt may have a breathing problem; the Veterinary Officer reported that a post-race examination of MAGNETISED, during routine testing shortly after the race, failed to reveal any abnormalities. Jason Watson reported that LUIGI VAMPA (FR), placed fourth, became unbalanced rounding the home bend, making contact with the inside running rail and Oisin Murphy reported that STARCAT, placed fifth, was denied a clear run approaching the 2 furlong marker.

Permission was given for TALBOT (IRE) to go early to post. Following the race, Oisin Murphy reported that TALBOT (IRE), unplaced, was slowly away.

Permission was given for ENGLISH KING (FR) to wear a red hood to the start. Approximately 1½ furlongs out, there was contact between HIGHLAND CHIEF (IRE), placed second, and KHALIFA SAT (IRE), placed fifth, resulting in HIGHLAND CHIEF (IRE) becoming unbalanced and lug right-handed into KHALIFA SAT (IRE), but after viewing a recording of the incident it was found that no riding offence was involved and that it had not improved the placing of HIGHLAND CHIEF (IRE). The performance of AL AASY (IRE), which started second favourite and finished last of the six runners, beaten by 8¼ lengths, was considered. The representative of William Haggas could offer no explanation for the colt’s performance.

QUEEN POWER (IRE) wore earplugs which were removed at the start.

Permission was given for GREAT VIBES to go early to post and wear a red hood to the start.

An enquiry was held to consider interference approaching the final half furlong when NAZUNA (IRE), placed fifth, ridden by David Egan, interfered with MISS CHESS (IRE), unplaced, ridden by Hollie Doyle. Egan was suspended for 5 days (August 13, 14, 15, 16 & 17) for careless riding as he had allowed his mount to drift right-handed when insufficiently clear of MISS CHESS (IRE), resulting in Doyle having to take a check and clip the heels of NAZUNA (IRE). Following the race, Andrea Atzeni reported that he felt ZOOMA took a false step shortly after the start and he therefore felt it prudent to pull the filly up; the Veterinary Officer reported that a post-race examination of ZOOMA shortly after the race failed to reveal any abnormalities. Ryan Moore reported that TEODOLINA (IRE), which started favourite and finished fourth, hung left-handed throughout.

Permission was given for GOLDEN BEAR (IRE) to go early to post and wear a red hood to the start. Following the race, Silvestre De Sousa reported that WINTER POWER (IRE), which started favourite and finished fourth, ran flat having run three days previously; the filly was routine tested.