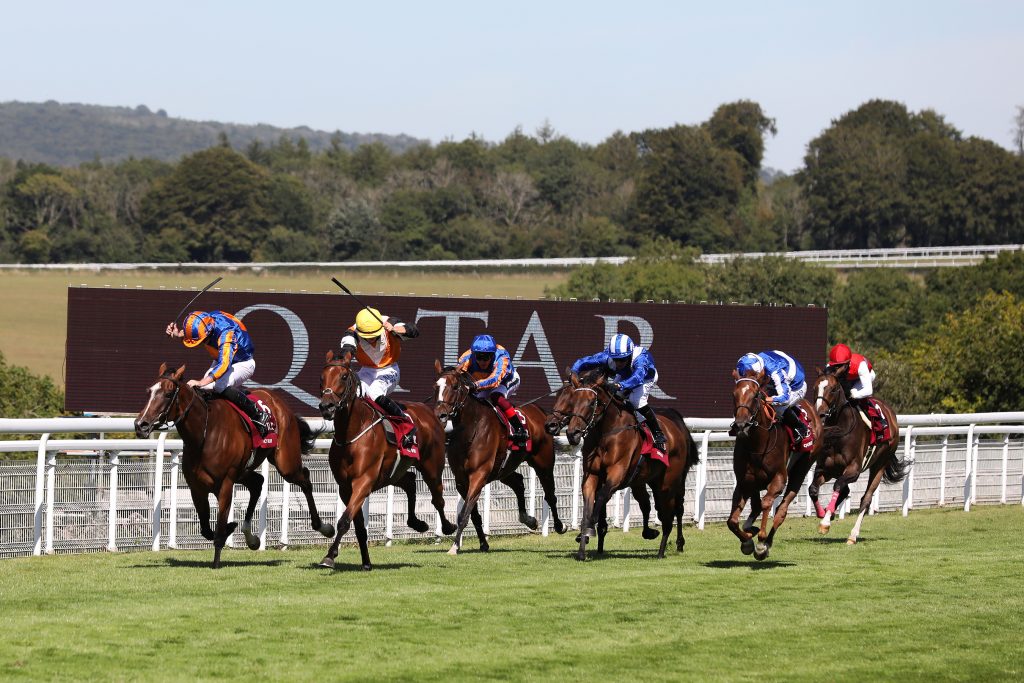 Fancy Blue (11/4) was Donnacha O’Brien’s first runner as a trainer in the UK and gave the Irish handler reason to celebrate as she became his first UK winner in the G1 Qatar Nassau Stakes. It was a second success at the top level for the daughter of Deep Impact, following her win in the G1 Prix de Diane (French Oaks) on 5 July.

It was 9/4 favourite Magic Wand (Aidan O’Brien IRE/Frankie Dettori) who took the seven runners along. She continued to lead until facing a strong challenge from Fancy Blue two furlongs out. Fancy Blue took the lead entering the final furlong and then had to see off the strong late challenge of One Voice (Jessica Harrington IRE/Tom Marquand, 20/1). Fancy Blue held on by a neck, with Nazeef (John Gosden/Jim Crowley, 100/30) staying on for third, another two and three-quarter lengths behind.

Donnacha O’Brien said: “That was a lovely performance from Fancy Blue.

“Fancy Blue is unbelievable, and it is massive. You never believe you will get one like her in your first year of training. When you have the pedigrees that Coolmore have, you always have a chance and I am very lucky.

“I was given Fancy Blue as a yearling and you don’t really expect these kind of things, but when they come along, it is more unlikely that the majority will be up to this sort of Group One class, but you do right by them so that they will fulfil their full potential and thankfully she has reached that class.

“It is unbelievable that I get a filly like her in my first year. People go a lifetime without getting a filly like her. I am no under no illusions as to how lucky I am, and I just need to do the best I can with her.

“I was looking after her as a yearling and I was responsible for her but I didn’t have my licence, so she was not under my name.

“Ryan is employed by Coolmore and that is why he rode Fancy Blue.

“I was hopeful of a good performance due to the weight she was getting, and this race fitted in well after her win in the French Oaks.

“Every race she has won she has had to battle for and work for it. Jessie’s filly [One Voice] came at her today and if she had got into a proper battle with her, I think she would have found more. She is a very tough, high-class filly who has shown how good she is today.

“We came here today unsure as to what she would think of the ground. I was speaking to Dad during the race that she was swapping and changing her lead leg coming down the hill. She didn’t look particularly comfortable and I think a little bit of juice in the ground won’t be any harm for her in the future.

“We will give her a little break now. She has had a busy start to the year. We might look at Irish Champions Weekend to bring her back. That could in the Matron which I know is back down in trip or in the Irish Champion Stakes. She will then go to Arc weekend where she has the option of the Prix de l’Opera or the Arc itself.

“After that, it will probably be the Breeders’ Cup or a trip to Japan for the Queen Elizabeth where there is big money on offer over a mile and three, and there is a bonus for winning the Prix de Diane.

“All the people in Japan are massive supporters of racing and I know myself from riding Saxon Warrior and him being by Deep Impact that we got a good following from the Japanese fans. It is always somewhere I have wanted to go and whilst it is not set in stone, she could go there.

“Arc weekend fits nicely so whether it is the Opera or the Arc, we will sit down and speak with the owners. Taking in the Vermeille could maybe be a possibility, but we will have to see. There are a lot of good races around and I think she would be competitive anywhere from a mile to a mile and a half. With a fillies’ allowance in the Arc, I wouldn’t be writing her off either so we’ll have to see how strong the Opera is and Coolmore could have Love for the Arc too. Nothing is set in stone.

“Love has a higher rating at the minute, but my filly Fancy Blue showed in France that she is suited to that style of racing. She relaxes and can quicken and whether Love can do it in the same – she looks like she is suited to a more galloping track like Epsom or Newmarket off a fast pace. Although she might not have been as impressive as Love yet, I think she has shown attributes that maybe Love hasn’t just yet – that’s all thoughts at the minute.

“If you had told me with everything that is going on in the world that I would have a dual Group One winner I wouldn’t have believed you. Everything is a bit strange and I certainly wasn’t expecting this.”

Discussing the difference between riding and training Group One winners, O’Brien continued: “It’s strange. They are different and I think you get a different kick out of it. When you are riding, you feel under pressure and want to do good for the horse and give the horse a fair chance.

“When you are training, I nearly feel pressure for the guys who are working with her every day and working in the yard – you want her to achieve her best for them. They are the ones putting the hard yards in.

“They are the ones you are thinking of when you are training whereas when you are riding, you kind of just nearly think of yourself.

“I liked her last year. When she was going to her maiden which she won at Naas, I thought she would run well but I didn’t fancy her to win it. She quickened up really nicely and gave me a lovely feel. Every time we have stepped her up in class, she has pleasantly surprised us, and she just continues to do so – she is just a filly who wants to please and she is improving the whole time. Hopefully, she continues to do that.

“I train at David Wachman’s yard [in County Tipperary] and this is great. Last year that was really a satellite yard and I was training her.”

Ryan Moore, enjoying a 19.6/1 day three double following the earlier success of Mogul and also recording his 50th career success at the Qatar Goodwood Festival, said: “I think there were some solid horses in there – Nazeef had done nothing wrong all year. I know very well how good Magic Wand is and she is proven in the best mile and a quarter races in America, Hong Kong and Australia, and obviously Deirdre (the 2019 Qatar Nassau Stakes winner) was in there. My filly [Fancy Blue] showed that she is very straightforward and has a very good attitude. She is tough.

“This filly has done nothing wrong. She ran a good race in the Irish Guineas and she has won a Diane, and a Diane is very hard to win, and now she has beaten the older fillies, and you have got to be pleased with what she has done so far. I am sure Donnacha [O’Brien, trainer] will get her home, see how she is and make a plan for the future.

“She was happy enough today on this ground, I would just say that she just wouldn’t want extremes of either.”

Speaking about his success on Mogul in the G3 John Pearce Racing Gordon Stakes earlier in the afternoon, Moore said: “Mogul has improved from both of his races this year. On form it was a very solid race; everything in there had shown form this year. He travelled nicely, and I was happy with what he did in the last furlong and a half – he put his head down and really wanted it. I thought it was a good, even pace; we just sat a little bit back off them and my horse was comfortable. He is a mile and a half horse really – I think that’s his trip. I think he could end up being a Grand Prix [de Paris] horse, which is a bit later this year.”