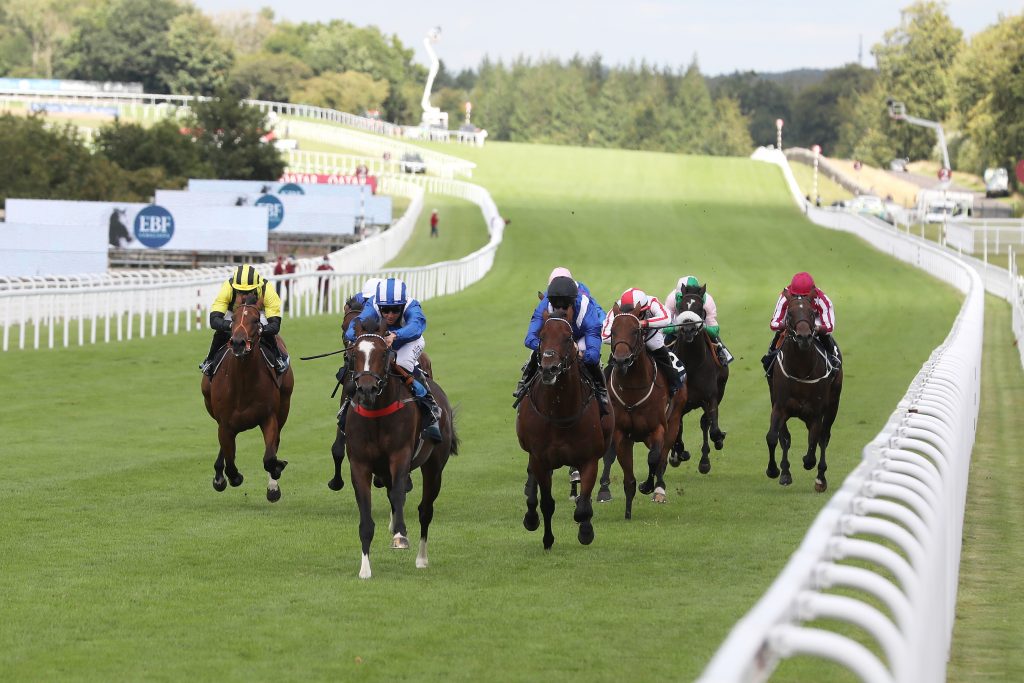 Alkumait (Marcus Tregoning/Jim Crowley, 5/4 Fav) became the fifth favourite to succeed on day one of the 2020 Qatar Goodwood Festival, recording a decisive victory in the British Stallion Studs EBF Maiden over six furlongs.

Sporting the famous silks of owner Hamdan Al Maktoum, the son of Showcasing was slowly away and held up at the rear of the field. After smooth progress to challenge two furlongs out, he led entering the final furlong and went on to score by two and a quarter lengths from Tawleed (John Gosden/Martin Harley, 10/1), who is also owned by Hamdan Al Maktoum.

Marcus Tregoning said: “Alkumait is a lovely horse who is by Showcasing like Mohaather. He has plenty of speed and I was quite impressed with him today. He missed the kick slightly, but I think that helped.

“When he picked up, it was just hands and heels. He is quite a nice horse in the making I feel.

“Martin Dwyer rode him at Newbury and gave him a lovely confidence boosting ride and got him to settle. He had been fiery at home, but he has been very settled since.

“It is quite windy and that is one thing he hasn’t been good with him, but luckily it all went well. I think he could be quite nice.

“He pulled a shoe off and that wouldn’t have helped much, but we like him and he will develop further.

“He is improving and has improved from the first race to this race. I thought he would win today. I heard some whispers about some of the other runners, but I really fancied him quite strongly.

“It is great to have a winner at Glorious Goodwood and despite everything going on, we are thrilled to be here.”

Tregoning saddles stable star Mohaather in tomorrow’s £275,000 G1 Qatar Sussex Stakes, a contest being viewed as the race of the season so far. The four-year-old was a smooth winner of the G2 Summer Mile at Ascot last time and Tregoning is hopeful of a bold performance in the seven-runner mile event.

He said: “I am quite confident that Mohaather is in great form. It is just whether we can beat two Classic winners. I know the races were run later in the year, but they are two very good horses; Siskin being unbeaten, and you had to be impressed with Kameko in the 2000 Guineas.

“Kameko didn’t exactly do it the easiest way and he still got on top at the end. If he didn’t have trouble in running he would have won easily I think. They are both good horses and it is not just those two!

“Mohaather is coming into the race in good form. I haven’t had a runner in the Sussex Stakes and I would like to win it for my owners.

“Even if he does get into a bit of trouble, he still has that ability to extricate himself out of trouble.”